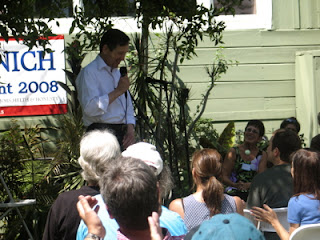 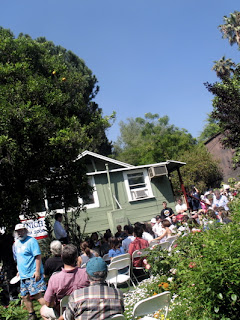 Dennis Kucinich won me over. Even though I know he won't win, he came to "my backyard" and talked about a lot of things I believe in, and he asked for my help. I have to ask myself, if I don't join his team, who will?
Posted by Lance Anderson at 7:37 PM No comments: 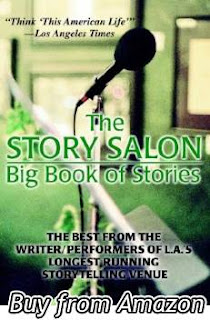 Just a minute ago, I was half-ass watching the NBA finals. The series has been a blow out by the San Antonio Spurs, so my interest has waned. I'm really only watching Lebron James (a 22 year old super star in the making.)

Anyway, I was bored so I picked a book off the shelf. Not just any book, but an anthology that contains my story Letterman on Acid. The book was published by Story Salon, a group I work with, including producing their podcast. (BTW we are recording a new show tomorrow night!)

It felt really cool to hold a book with my story inside. The feeling made me want to finish my novel King of the Boys.... Sometimes in our digital age, one can forget the power of a book.
Posted by Lance Anderson at 6:52 PM No comments:

The moment I first heard about podcasting from my friend Dan Klass, back in the fall of 2004, I knew it was something I had to do. Unfortunately, I didn't have a computer and I was living in a basement apartment (literally meaning the basement of my friend's pad. ) That winter, I scrambled to get an iBook (and a Girlfriend) so that I could change my life.

By March of 2005 I was ready (with the help of Dan) to begin producing my storytelling podcast Verge of the Fringe. Dan held my hand through the process and even gave me a few small pieces of Radio Shack gear. He also told me to use Blogger to easily post my shows, and Feedburner to generate my "feed." I had no idea what was going on with all of the tech stuff, so I just did what he told me to do. Plus they were both free, which was right in the middle of my price range.

For the most part I have been happy with both, and I still use them. Back when I was teaching with Dan at the Apple Store at the Grove, I would always point students in their direction. But secretly I was bummed that Blogger wasn't easier to use.

Times have changed, now Blogger and Feedburner are owned by Google. Which looks to be a good thing. They really have made creating a cool blog, so much easier! (Although, I wasn't able to place the image for this story where I wanted it. I know it can be done.... Please just make it easier for tech lunk heads like me. Thanks Mr. Google.)

The next time I trip on Google, I'll focus on "My New Blogger/Google Toy" aka "My Newsreel" (see the bottom of the page.) I really dig it a ton.... Until next time.

--Lance
Posted by Lance Anderson at 10:46 AM No comments:

"The Key" for Getting Comments on Your New Blog 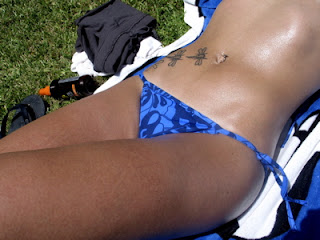 I have discovered "the key" for getting people to comment on your new blog. Post a picture of your Girlfriend in a bikini. So here is another....

I Need Your Help! 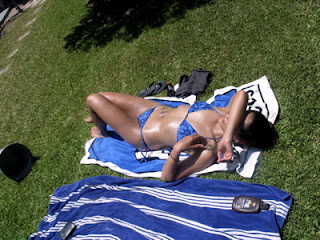 Can someone please tell my girlfriend that she is NOT "fat"? Sometimes she can be crazier than me!... Thanks in advance for your help.
Posted by Lance Anderson at 4:37 PM 6 comments: