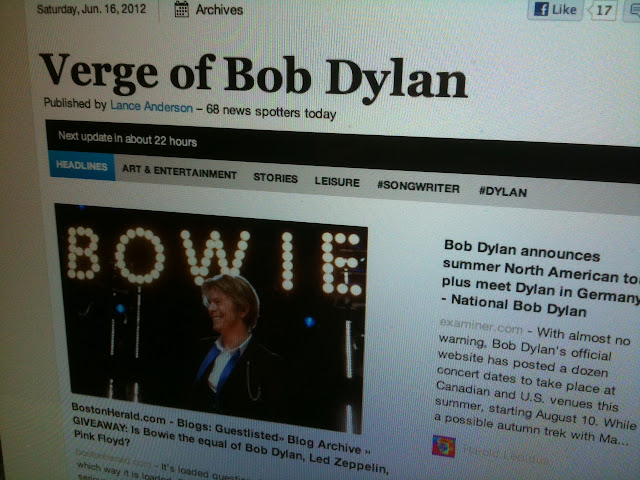 Blogs have their place. I see that now.

This morning I was going through my daily ritual of "publishing" my Verge of Bob Dylan "paper" that  aggregates, via Twitter, stories about Dylan and related artists, thanks to the cool people at Paper.Li. Today my top story was from Boston Herald by a dude named Jed Gottlieb. Jed, who bills himself as "the Northeast's preeminent David Lee Roth scholar," posed the provocative question: Is David Bowie the equal of Dylan, Zeppelin, Floyd?

I sink or swim with Dylan, that's obvious. As for Led Zeppelin and Pink Floyd, they are unquestionably influential and trans-formative bands in the history of Rock 'n Roll, no doubt, but I've never been a rabid fan. They both have blown me away many times and in much different ways, but they seem distant. Maybe it is just me...and I can except that.

David Bowie on the other hand poses a real challenge from the outside, to the horse I have all my money on. Very few performers are in their own category, the best example being Ray Charles. One could argue, and I will, that Bowie is also in his own category. Like Dylan, how can you really define Bowie? Jed gives us a launching pad with "he was a spaced-out folkie, psychedelic heavy metal pioneer, prog-rock overlord, dynamite soul singer, minimalist outsider, and pop music king."


Bowie sparks the imagination, because the audience is challenged to fill-in the blanks with their own mind.

I remember being confused by him as pre-teen kid in the 70's, when I saw him on Saturday Night Live. He was wearing this crazy red...I'm not sure what...while being carried out on to the stage. "Who is the guy?" I thought, "What a weirdo." Over the years, the transgender persona of his youth has aged with grace and gravity.

It wasn't until the mid-nineties that I really dug into Bowie. I was living in funky house in Burbank with my best friend and another dude from his band Kittens for Christian. I was 30 and still chasing the Rock 'n Roll spoken word artist dream. I was renting a room and was just barely keeping it together. I remember playing Bowie on loop in my room...loud...seriously loud. One night our crazy postman neighbor was banging our front door, demanding I turn it down...or else.

During that same period, I was studying physical theatre, also known as mime, with one of the masters of the art form (the OG form of storytelling). My mentor had lived in New York during the seventies and was part of the downtown Bohemian scene. At one point he even was in the same American Mime Theatre class with a young David Bowie. He said that Bowie was fantastic, a natural and striking performer. On a few occasions, he even shared a couple of cups of coffee and conversation with Bowie at a local SoHo diner. He said Bowie was generally low-key and humble...even after he became famous.

A few years ago I was talking about Bowie with an old junior high classmate, who back in the day was the "pretty girl" who used to set the boys' hearts aflutter. With a Devil's grin, she said she had an agreement with her husband, that if fate ever landed her on the same deserted island with Bowie, she had her husbands' blessing to have a night of bliss.

Today when I read Jed's question, I thought of two videos I've watched many, many times on YouTube. My initial impulse was to a link to Jed's piece on Facebook followed by my "argument" about Bowie's greatness, by posting the two examples. Three separate posts.

Which made me face an earlier thought I had this morning. "I need to revive my blog, but where do I start?" It's been years. Politics makes me sick, although it's an obvious choice. Then a few hours later, I'm reading Jed's blog post and considering annoying my "friend's" slumber on Facebook with three post...and then it hit me...my "response" calls for a blog post.

A great performance is a mixture of many things coming together in the same fleeting moment. An artist's performance, material, venue audience and setting. David Bowie's opening two song set at The Concert for New York City, just days after 9/11 is a perfect example of a great performance and will be locked in America's time capsule as long as our story is being told.

After Bowie briefly acknowledges both the audience and the moment, he launches into the definitive version of Heroes. Definitive because of the moment.