Every Grain of Sand and the Cobra 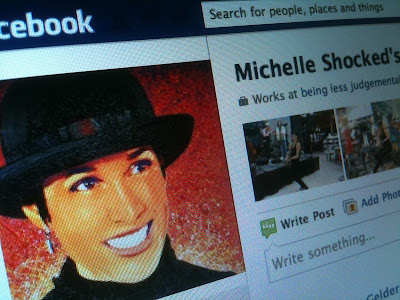 December of 2010 was cold in Los Angeles. The city was suffering from a heavy and extended rain storm, while my very small family (Marisol and my dad Blayney), were driving back and forth to Saint Joseph's Hospital in Burbank, the place of my birth. This time my mom, Lavina, was there to complete the circle of life.

In the long and final days after my mom's heart surgery, she never left intensive care and was barely conscious. There was a lot of sitting around and waiting. To distract myself from the pain of the moment, I turned to the same place most modern people turn...Facebook.

For most people it was simply the days leading up to Christmas, a day I know my mom, semi-conscious or not, wanted to survive past. She always lived for milestones. I'm not going to lie, it was hard to watch other people, celebrating so freely at every turn, while we formed our small circle of grief. So I used Facebook not only to get the word out to my larger family and friends, but I used Facebook to distract my mind.

I was during that cold and rainy time, I virtually met singer-songwriter Michelle Shocked on Facebook.

Earlier in the year I had sent a "friend" request to Michelle and she had "accepted," so according to Facebook we were "friends" even though we had never interacted. Michelle was feeling the limitations of Facebook, that those in the public eye quickly have to confront. She had decided to set-up a new profile for people who weren't real-life friends, but instead were fans, supporter and lurkers. She sent a message to everyone and I responded. Michelle chose to engage, so we sent a few messages back and forth, while I tried to forget, if only for moment, that my mom was dying under the same roof she gave me life.

I told "Miss Shell Shocked" how much I admired her "skateboard punk rocker" music and courage to follow her own musical path. That I used to listen, on a loop, to my 1988 cassette of Short Sharp Shocked on my beatbox. A time when I was first digging deep into music...even before I got hooked on Dylan.

Nearly needless to say, I asked her about Bob. Michelle said she wasn't really a fan, but she acknowledged his place as an important artist.  Knowing Michelle had openly embraced her Christian faith, I asked her if she knew one of my all-time favorite Bob Dylan tracks, Every Grain of Sand from his Gospel album, Shot of Love. Michelle didn't seem overly familiar with the song, so I sent her a link to Bob's site to refresh her memory.

Meanwhile, a few days before Christmas, my small family saw signs of hope, but by Christmas Eve we could only hope for the best. Feeling powerless, I decided to try and send a prayer into the universe, by recording an a cappella cover of "Every Grain of Sand Sung by the Solo Choir in my Attic"  and posting it on my podcast. I didn't know what else to do.

Our small, and now growing smaller, family spent Christmas in my mom's room. The hospital was nearly deserted. It seemed like just the four of us saying goodbye. Christmas Night, after sitting with my dad in the waiting room watching "our" Lakers lose, I went back to my mom's room to say goodbye for the last time.

I leaned over to kiss her goodnight and said, "Well Mom, you made it through Christmas." With her eyes closed, she nodded yes.

The next morning she let go.

Facebook became an even more powerful "social media" tool after she passed. I was able to let family know without have to contact everyone personally. Also I was truly comforted by warm messages from all corners of my life. In fact, the response was so powerful, just the thought of it brings me to tears, even today. Literally.

A few weeks into the New Year, I sent Michelle Shocked a note about what had happened to my mom, with a link to my very humble cover of Dylan's Every Grain of Sand. Michelle claims to like my version better than Bob's, although her resistance to Bob certainly gave me an edge.

My correspondences with Michelle naturally waned as she geared up for her upcoming tour, and as my small family made plans for my mom's celebration of life. I know my mom is eternally grateful for three choices we made. First, we had her cremated (she was always very claustrophobic). Second, we held her memorial at Descanso Gardens. Third and most importantly, her beloved cousin David Starr Archuletta sang at her service. I asked David, a pastor, to sing Every Grain of Sand. It was perfect.

I mentioned my mom's passing on Twitter to a chorus of crickets. That was a harsh reality, I was forced to accept. Yet moments of magic can happen on Twitter too.

Over the past several of months I've been following Sinead O'Connor on Twitter and her many different Twitter aliases. Sinead has gone through a lot, much of it in public. From a distance, she can seem erratic in one moment, yet brutally clear in the next. She unabashedly gushes over Dylan, in long rambling and often brilliant, "letters" to Bob.

I first heard Sinead's The Lion and the Cobra in 1987 on my college roommate Jay's turntable. I loved the album. Sinead's powerful and haunting voice, floored me. In fact, her bold hair style, helped give me the courage to shave my own hair, after fighting a losing battle with baldness since high school. My connection and reverence for Sinead O'Connor runs deep.

Recently Sinead put together an impromptu recording for a cover of Dylan's Meet Me in the Morning. Then, with the help of her Twitter followers, she made a quick slide show video of her family photos to accompany the song.

After that, I sent a tweet with a suggestion to sing Elvis Costello's favorite Bob Dylan song...Every Grain of Sand. A few days later I followed up with a tweet with a link to my humble version of the song, sung by the solo choir in my attic.

And then magically this response... 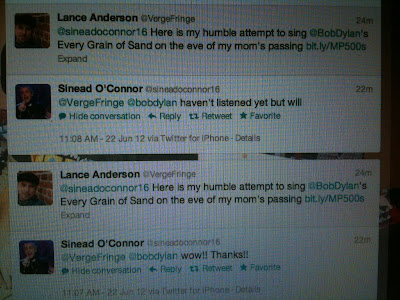 Do I think Sinead O'Connor will take the time to listen to my questionable singing? Yes I do.

I asked Sinead to be kind...after all I was only asking one of the great singing voices of the turn of the century to listen to me sing...alone and in a moment of desperation.

Maybe if I'm lucky...lucky for all of us...maybe Sinead will sing Every Grain of Sand. Then the circle will truly be complete.

Thanks Lori! I really hope she does too...Sinead's voice and those lyrics...it would be transcendent.